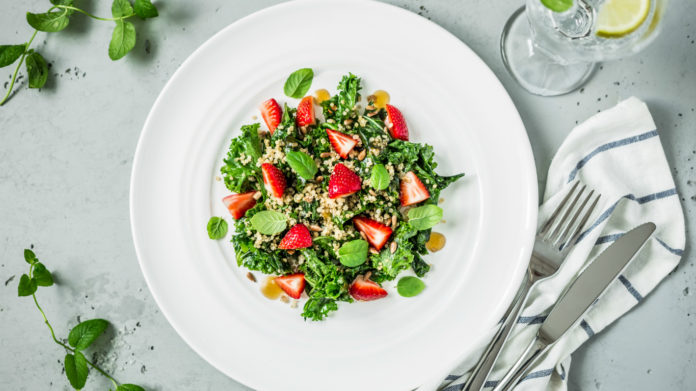 You may want to reconsider eating those fiber-rich strawberries. And maybe think twice before adding two of the always so popular vegetables to make a smoothie “green.” Yes, we are talking about spinach and kale.

These superfoods are among fruits and vegetables that contain the most pesticides, according to Environmental Working Group’s 2019 “Dirty Dozen” report. The last time kale made the list was a decade ago.

Spinach did not fare much better. This popular green leaf vegetable ranks second, a huge jump since its eighth place in the 2018 report. Three-fourths of the tested samples contained a certain pesticide — a neurotoxic bug killer — that has been banned in Europe. Many samples contained pesticides that have been banned for use on spinach but are allowed on other crops.

Pesticides include several chemicals that are used to kill insects, weeds, mold, and rodents that may destroy the produce. While they may protect the food, they can also be toxic to people, according to the World Health Organization.

The pesticide that has been detected the most in all examined foods was Dacthal, or DCPA. The Environmental Protection Agency classified DPCA in 1995 as a possible human carcinogen. Europe banned it from use in 2009.

EWG makes the case for choosing organically grown fruits and vegetables, citing research published in December in JAMA Internal Medicine, a journal from the American Medical Association. According to the study, people consuming the most organically grown food, as opposed to conventionally grown, had 25% fewer cancers. The study, however, does not fully agree with previous studies on the matter and was not able to separate factors such as wealth and other lifestyle choices that may affect the result.

While eating organic is probably safer, a diet full of fruit and vegetables, regardless of their source, is always the healthiest choice. If you can’t find or can’t afford organic options, you may want to look for fruits and vegetables with lower amounts of pesticide residues. The EWG also published a list with the produce found to contain the least amount of pesticides.