Walk through any large grocery store and the coffee aisle goes on forever. The same can be said as people walk down streets of major cities — coffee shops everywhere, from national chains to local, single-store retailers. Of all the coffees sold at all these places, one stood out in a new major national survey of brands.

Harris, the polling company, asked over 45,000 people about almost 2,000 brands that were sorted among 196 categories. Ninety-one companies were awarded Best Brand of the Year. The Harris Poll CEO, John Gerzema, said: “These are brands Americans especially love and expect great things from in the future.” Dunkin’ Donuts coffee won the coffee brand crown. Harris is also known for its survey of the companies with the best and worst reputations.

The coffee part of Dunkin’ is huge. The company sells 2 billion cups a year. And customers can pick from a wide variety of coffees, hot and cold: Americano, latte, macchiato, cappuccino, espresso and several versions of most of these. In the coffee category alone, there are 14 types of drinks. Dunkin’ also sells bags of its coffee and K-Cup pods in grocery stores.

Dunkin’ says there are several reasons its coffee tastes better than others. In its restaurants, any of its Original Blend that is not sold within 18 minutes of brewing is thrown out in favor of a fresh batch. Dunkin’ says its 100% arabica coffee beans from Central and South America produce a taste better than other coffees. At the core of its ability to produce best-in-class coffee, the company says “Dunkin’ uses a unique, proprietary coffee recipe that people love because it’s a consistent, smooth, never bitter, rich tasting cup of coffee that they can get every day.” Aside from how it tastes — with milk or not — here are 18 reasons to drink coffee for your health.

Whatever the recipe is, Harris says it worked. 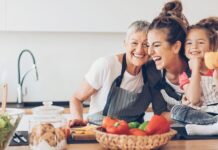