Often, the foods and beverages people love the most are unhealthy — soda, for example, can be killing you in at least 10 different ways — and should be consumed only once in awhile. Coffee, however, appears to be a rare exception. One of the most popular beverages in the United States, coffee also has a number of health benefits — which, in some cases, increase as consumption goes up.

According to a 2018 survey commissioned by the National Coffee Association (NCA), 64% of American adults drink at least one cup of coffee a day, the highest share of coffee drinkers since 2012. Many of those same adults are at a significantly lower risk of a number of sometimes fatal diseases and conditions than those who abstain or who do not drink much coffee.

24/7 Wall St. reviewed medical research findings from a range of journals and sources to identify 18 health benefits of drinking coffee. The benefits range from an improved mood and reduced risk of depression to a reduced risk of heart disease, the leading cause of death in the United States — and these are America’s heart disease capitals.

Though exactly when and where coffee was discovered is a matter for speculation and debate, coffee was being cultivated for commercial purposes on the Arabian Peninsula as early as the 15th century. Coffee made its way to European shores in the 17th century and was brought to New York shortly thereafter — though tea would remain the preferred drink in colonial America for some years to come.

Coffee’s many health benefits are derived from a number of the drink’s properties, not the least of which is its caffeine content. Every morning, millions of Americans start their day with a cup of joe to wake up and feel more alert. In addition to waking you up, coffee offers additional benefits.

Caffeine, whether in coffee or tea, has been linked to significant reduced risk of a number of diseases and conditions, including depression, Parkinson’s disease, multiple sclerosis, and Alzheimer’s disease, which causes more than 350 deaths per 100,000 people a year in several U.S. states.

Several other ingredients, more unique to coffee than tea, also have health benefits of their own. For example, chlorogenic acid, an antioxidant found in coffee beans, has been shown to prevent retinal damage that can lead to vision loss. Additionally, coffee appears to reduce the risk of liver cirrhosis, regardless of caffeine content.

However, many of coffee’s purported medical benefits have some serious caveats. For many diseases on this list, including type 2 diabetes and liver cancer, the risk appears to decline as coffee consumption goes up. And as the Mayo Clinic notes, more than four cups of coffee a day can cause irritability, upset stomach, migraine headaches, and muscle tremors — side effects that may outweigh any potential benefit. Drinking a lot of coffee in the afternoon can also be a symptom of a serious health problem. 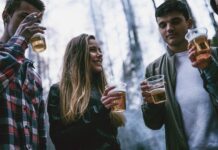