24/7 Tempo
Home Health Stress and Other Things That Can Lead to Memory Loss and Brain...

Brain fog, memory loss, difficulty concentrating, and other dementia-like symptoms can be caused by several diseases. Sure, sometimes the real reason behind dead brain cells and loss of gray matter is Alzheimer’s. But sometimes, memory loss is the result of a treatable disease or condition, a nutritional deficiency, an unhealthy habit, or another reversible issue.

To identify the factors that contribute to memory loss and brain shrinkage, 24/7 consulted a neurologists and reviewed information published on sites of organizations specializing in brain health such as the Alzheimer’s Association.

Brain atrophy, which means the loss of neurons and the connections between them, occurs naturally, albeit slowly, as we age. Many of the factors that can reduce the risk of brain shrinkage and memory problems, are modifiable, according to Dr. Glen Finney, neurologist at Geisinger Health System in Pennsylvania and New Jersey.

Staying active and eating a balanced diet can lead to reduced risk of multiple conditions that can affect brain function. Protecting your head from injury is also important. Another very important factor is restful sleep. Reduced brain function is just one of at least 21 damages you do to your body when you don’t get enough sleep.

Some of the conditions on the list also increase the risk of Alzheimer’s, a degenerative and progressive neurological disease with no known cure and the sixth leading cause of death in the United States. And these are the states where Alzheimer’s is soaring.

To identify what — other than age — can cause memory loss and brain atrophy, 24/7 Tempo consulted a neurologist who specializes in disorders of memory, thinking, and cognition, and reviewed numerous academic studies on what affects cognitive function and the structure of the brain. 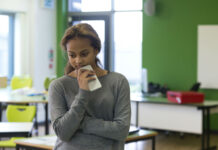 20 Warning Signs Your Child May Be Getting Bullied at School