Rock bands come up with their names from all kinds of sources. Sometimes they’re unimaginatively straightforward — no prizes for guessing who leads up the Marshall Tucker Band, the Dave Matthews Band, or the Spencer Davis Group. Sometimes they’re named in tribute to someone fondly or less than fondly remembered: Kings of Leon honors the late Leon Followill, grandfather of the founders; Lynyrd Skynyrd was christened in remembrance of Leonard Skinner, the not-exactly-beloved high school gym teacher of the main band members.

The Rolling Stones borrowed their name from a song, “Rollin’ Stone,” by one of their early idols, blues great Muddy Waters. The Doobie Brothers were named for a marijuana cigarette. Boston, Chicago, and Berlin obviously take their names from cities. The names Steely Dan and the Velvet Underground have X-rated origins. (These are the 100 most popular rock bands of all time.)

Some band names sound downright threatening — Rage Against the Machine, the Killers, Five Finger Death Punch, And You Shall Know Them by the Trail of Dead. Others sound just plain silly: The The, Mr. Mister, Chumbawamba, Hoobastank. The website BandNameExplained tells the stories behind many of these.

A surprising number of bands, though, have names that reference food or drink, either directly or metaphorically. Many of these were founded back in the 1960s, and have been revived more than once since then. Here’s a roster of the most famous rock bands formed every year since 1960.

24/7 Tempo has assembled a list of 25 of the more prominent such musical groups, in styles ranging from psychedelic to electronic to blues-rock, explaining — whenever possible — how they got their gastronomically suggestive names. 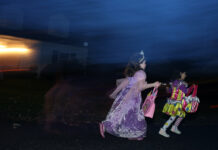