“Supernatural” was Santana’s 18th studio album. Certified 15-times platinum, it won eight Grammy Awards in 2000, including Album of the Year and Best Rock Album. A list of blue-chip guest stars — including Eric Clapton, Lauryn Hill, Dave Matthews, Rob Thomas, and Cee-Lo Green — joined this prolific Latin rock band leader Carlos Santana on the album. Six singles came out of “Supernatural,” including “Smooth,” which held the No. 1 slot on the Billboard Hot 100 for 12 weeks.

Prince masterfully fused multiple genres on his “Purple Rain” soundtrack, from R&B to rock. But the album is held together by its pop sensibility. The songs “When Doves Cry” and “Let’s Go Crazy” both reached the top of the Billboard Hot 100 chart.

This is actually the second Fleetwood Mac album called simply “Fleetwood Mac.” (The first one, released in 1968, included Mick Fleetwood and John McVie, but not Lindsay Buckingham, Stevie Nicks, or Christine McVie.) Interestingly, it took this iteration more than a year after its release to reach No. 1 on the Billboard 200. Three top-20 singles came out of the album, including “Rhiannon,” “Say You Love Me,” and “Over My Head.” In 2018, the band released a four-disc deluxe edition of the album, including demos, singles mixes, and live performances. 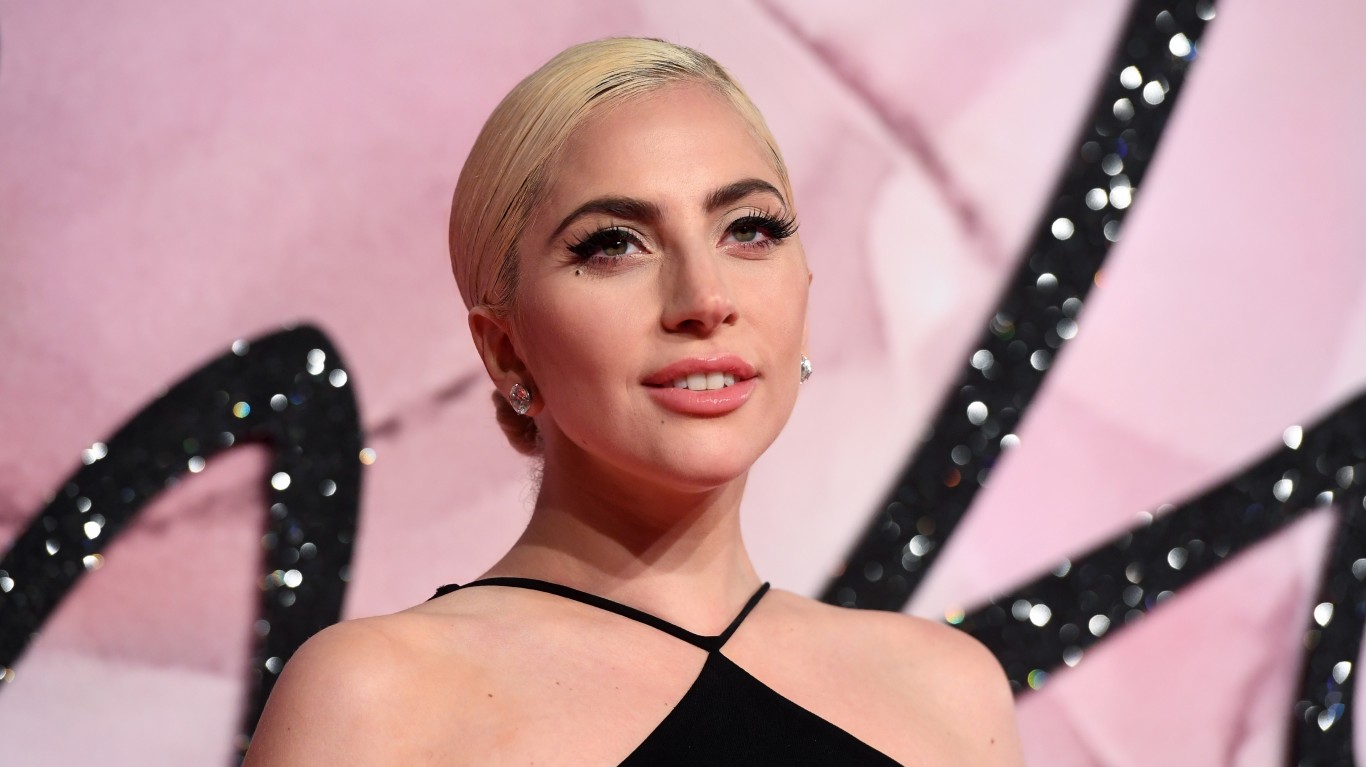 24/7 Tempo
50 Most Powerful Women in Entertainment

This first Elton John’s greatest hits compilation was a huge success, spending 10 weeks at No. 1. Nearly every song on the album reached the top 10 on the Hot 100 chart, proving the British singer to be a master at crafting pop hits.

It’s unsurprising that Paula Abdul has an ear for catchy dance music, considering her career as a dancer and choreographer prior to emerging as a pop musician. “Forever Your Girl” was the first of two albums Abdul released that would hit No. 1 on the Billboard 200 charts, the other being 1991’s “Spellbound.” “Forever Your Girl” featured four No. 1 hit songs: “Straight Up,” “Opposites Attract,” “Cold Hearted,” and its title track, “Forever Your Girl.”

“Unorthodox Jukebox,” the second studio album from Bruno Mars, featured a variety of styles from the Honolulu, Hawaii-born singer and songwriter, including reggae, rock, and soul. The album occupied the Billboard 200 for 203 weeks and produced the Billboard Hot 100 No. 1 hits “Locked Out Of Heaven” and “When I Was Your Man.”

Billy Joel’s first greatest hits album is one of the top-selling albums of all time — the RIAA certified it double diamond. The album includes the majority of Joel’s hits, including the two No. 1 hits “It’s Still Rock And Roll To Me” and “Tell Her About It.” The songwriter had enough material to release a third volume of greatest hits in 1997.

Lionel Richie’s “Can’t Slow Down,” his second solo album, sold 10 million copies by December 1985, just over two years after its release. The blockbuster album that appealed to a broad audience spectrum included two of his five Billboard Hot 100 No. 1 hits, “All Night Long (All Night)” and “Hello.”

Eminem released his first No. 1 record in 2000, “The Marshall Mathers LP.” The album balanced vulgar humor and dark imagery with hip hop beats and catchy choruses. It featured numerous singles, including “The Real Slim Shady,” which was a huge hit on MTV and won its Video of the Year award.