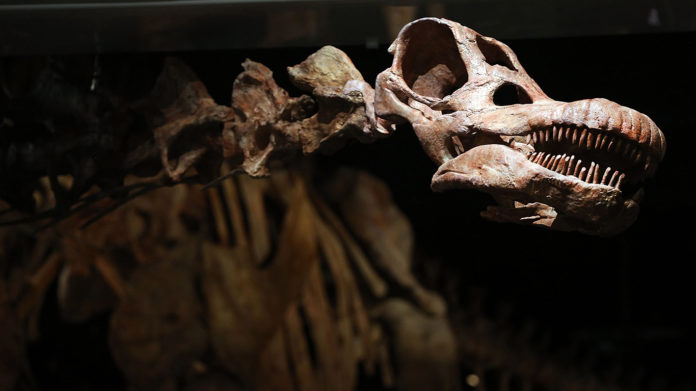 So, what exactly makes a fossil famous? Is it thrust into the limelight for its scientific significance or for the miraculous way it was discovered? Or perhaps it’s the time at which the discovery was made. We would argue it’s a combination of all three.

24/7 Wall St. reviewed various scientific reports as well as discoveries reported by the American Museum of Natural History to determine the most famous fossils ever discovered. We included anything from the earliest traces of humans to dinosaurs and ancient reptiles fossils.

There are two fossils on our list that became famous quickly after their discovery. One such fossil, Lucy, is the most famous fossil of the 20th century.

Lucy was excavated in northern Ethiopia in November 1974, about seven years after the Beatles released their hit song, “Lucy in the Sky With Diamonds.” The paleontologists on site were listening to the song the same night they unearthed the most complete skeleton of the Australopithecus afarensis (one of the earliest known human species). Before the fossil even received its scientific name, it was named Lucy.

Another fossil to quickly gain attention upon discovery is the Hobbit. Otherwise known as Flo, from the scientific name Homo floresiensis, the fossil was found in 2003, the same year the movie “Lord of the Rings: The Return of the King” was released. The book series that turned into an epic movie trilogy likely propelled the fossil’s popularity — Flo’s small stature likely reminded the world of the hobbits’ small stature, and the fossil soared in popularity.

Click here to see the most famous fossils ever discovered.
Click here to read our detailed findings & methodology.