24/7 Tempo
Home Food The Best Shake in Every State

Milkshakes became a popular treat in the United States around the beginning of the 20th century and evolved into a staple of ice cream shops, diners, and drive-ins across the country. The combination of ice cream and milk blended together with a variety of flavorings — sometimes including malted milk powder, which makes a shake a malt — is a simple concept with undeniably delicious results.

To assemble a list of the best shakes in every state, 24/7 Tempo considered ratings and reviews of shake purveyors on Yelp and TripAdvisor and on local food, travel, and review sites for every state. Sample shakes are drawn from each venue’s online menu or Facebook page. (Besides the places on our list, you’ll find shakes at most, if not all, of the the best ice cream shops in every state.)

Though the 1950s may have been the milkshake’s heyday, this list shows that shakes are still taken seriously all over America. Like many classic foods, they started simply but have often evolved into masterpieces that are more dessert than beverage, with not only flavorings but also elaborate toppings added.

A good shake, especially one that isn’t too complicated, also remains the ideal accompaniment to a good old-fashioned burger and fries. Though many traditional diners and drive-ins have been replaced over the decades with the same cookie-cutter chains stretching endlessly across the land, those that remain channel the spirit of an earlier era through their ambience and menus — with shakes most definitely involved. (Check out the best diner in every state.) 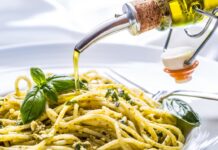