“There’s one thing that’s really great about waking up early,” the comedian Kathy Griffin apparently once said, “and it’s not jogging or greeting the day — it’s just that that’s when they make doughnuts.” The Dutch brought an ancestor of the modern doughnut to America in the early 19th century, in the form of deep-fried dough balls called olykoeks (literally “oily cakes”). A sailor named Hanson Crockett Gregory is credited with first putting holes in the oily cakes, either to avoid leaving a raw doughy middle when they cooked or so that he could store them on the spokes of his ship’s wheel for convenient snacking.

The first doughnut-making machine appeared in 1920, and doughnuts soon became a commonplace offering at bakeries and diners. They were especially popular during the Depression because they cost less than a nickel and were reasonably filling, according to an article on the history of the doughnut in Smithsonian Magazine.

Today, doughnuts have become a kind of blank canvas for creative bakers, and are likely to be topped or filled with everything from bacon to jalapeños to foie gras. They’re even sometimes repurposed to serve as burger or sandwich buns — like the Krispy Kreme sloppy joes served at the Virginia State Fair. (These are the strangest state fair foods ever.)

Even conventional doughnuts aren’t very healthy, of course. An average glazed doughnut can weigh in at as much as 250 calories, while chocolate-frosted or jelly doughnuts might hit 300. Despite their caloric load, though, they’re still not among the 50 least healthful fast food breakfast items.

There are said to be more than 13,000 doughnut shops in the U.S. currently, counting both chains and independents. According to Yelp, Boston is the per capita doughnut shop capital of America, with one such place for every 2,400 inhabitants. But every state has plenty of doughnut shops of its own, and 24/7 Tempo has compiled a list of the best example in every state, concentrating on independents and small chains. As with restaurants and retail stores all over the nation at this time, some of these shops might be temporarily closed or offer only takeout and/or delivery service. 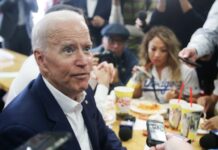 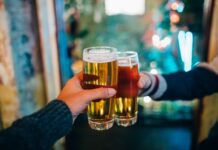