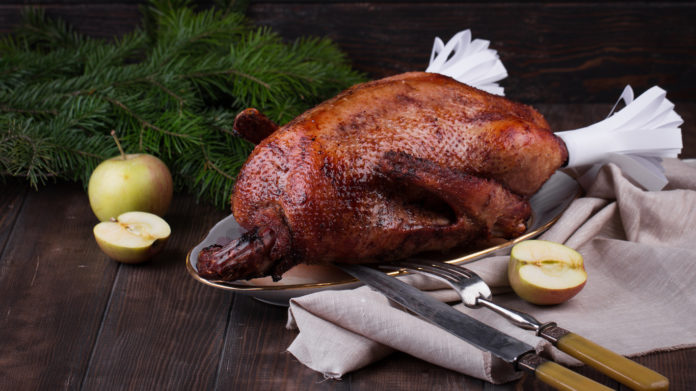 Turkey is synonymous with Thanksgiving in America. Picture a tableful of family and friends gathered for the holiday meal, and there it is in the middle of things, taking pride of place: a plump, mahogany-brown roasted gobbler, surrounded by all the accoutrements, waiting to be carved. It’s essential to the Norman Rockwell vision of Thanksgiving that so many Americans, of whatever cultural origins, have come to accept as traditional.

How did it ascend to that exalted position in our culinary canon?

It didn’t necessarily start with the Pilgrims at that fabled “First Thanksgiving” back in 1621. We’re not even sure that turkey was involved. All we know for certain is that hunters went out and brought back game birds for the occasion — possibly, but not definitely, including some wild turkeys — and that there was plenty of venison.

Turkey is native to North and Central America but had found its way to England by the 1530s. The English considered fowl to be preferable to ordinary meat for important feasts and quickly elevated the turkey to special status. Henry VIII is credited with having established the tradition of eating turkey for Christmas dinner.

The Pilgrims likely brought the English taste for turkey back to the New World, and the bird became a popular feature of large meals in colonial times. It was a natural addition, then, to feasts celebrating the day of national thanksgiving and prayer proclaimed by George Washington in 1789 — the real first Thanksgiving.

In her 1827 novel “Northwood,” New Hampshire-born writer Sarah Josepha Hale, known as “the Godmother of Thanksgiving,” offered what was probably the first detailed description of a Thanksgiving feast in something approximating the form we know it today. At the Romilly family’s beautifully set holiday table, she wrote, “The roasted turkey took precedence … being placed at the head of the table; and well did it become its lordly station.”

That was hardly all, however. The table also groaned with — besides “innumerable bowls of gravy and plates of vegetables” and various desserts — a leg of pork, a loin of mutton, a goose, a brace of ducklings, and a chicken pie.

Hale’s description is a good reminder that, as important as turkey may have become to Thanksgiving dinner and as tasty as it can be (if it’s of good quality and not overcooked), it is hardly the only celebratory main dish worth considering for the holiday table. For variety, or just for fun, it’s worth considering some delicious alternatives to the usual bird — poultry and otherwise.