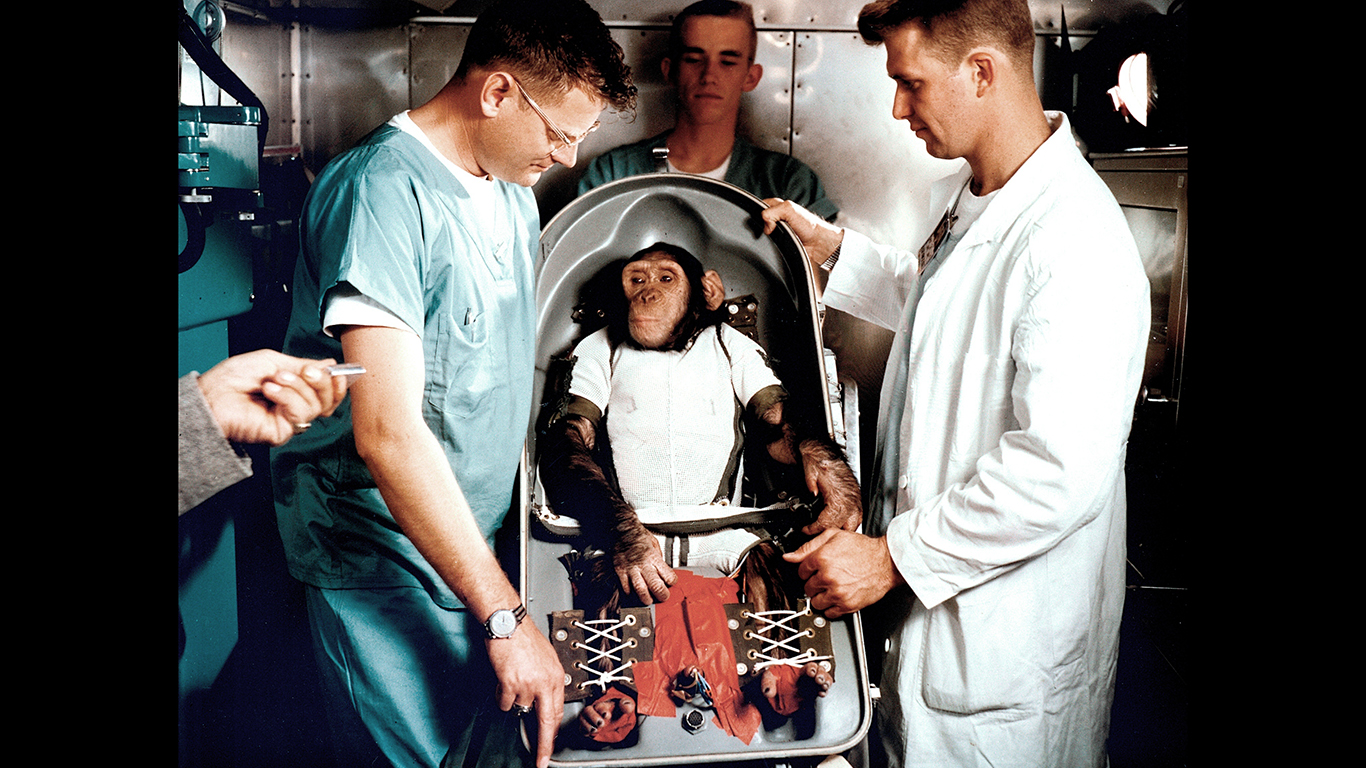 Although several animals preceded him in the space program, Ham was the first hominid to be launched into space on January 31, 1961. His mission also helped pave the way for America’s first human astronaut, Alan Shepard. Ham, whose name was an acronym for the Holloman Aerospace Medical Center, where he was trained, performed well during the flight, only suffering from fatigue and mild dehydration. He became a celebrity after the launch, even appearing on the cover of Life magazine. Ham lived the rest of his days at the National Zoo in Washington, D.C, and the North Carolina Zoological Park, where he died at age 26 in 1983. 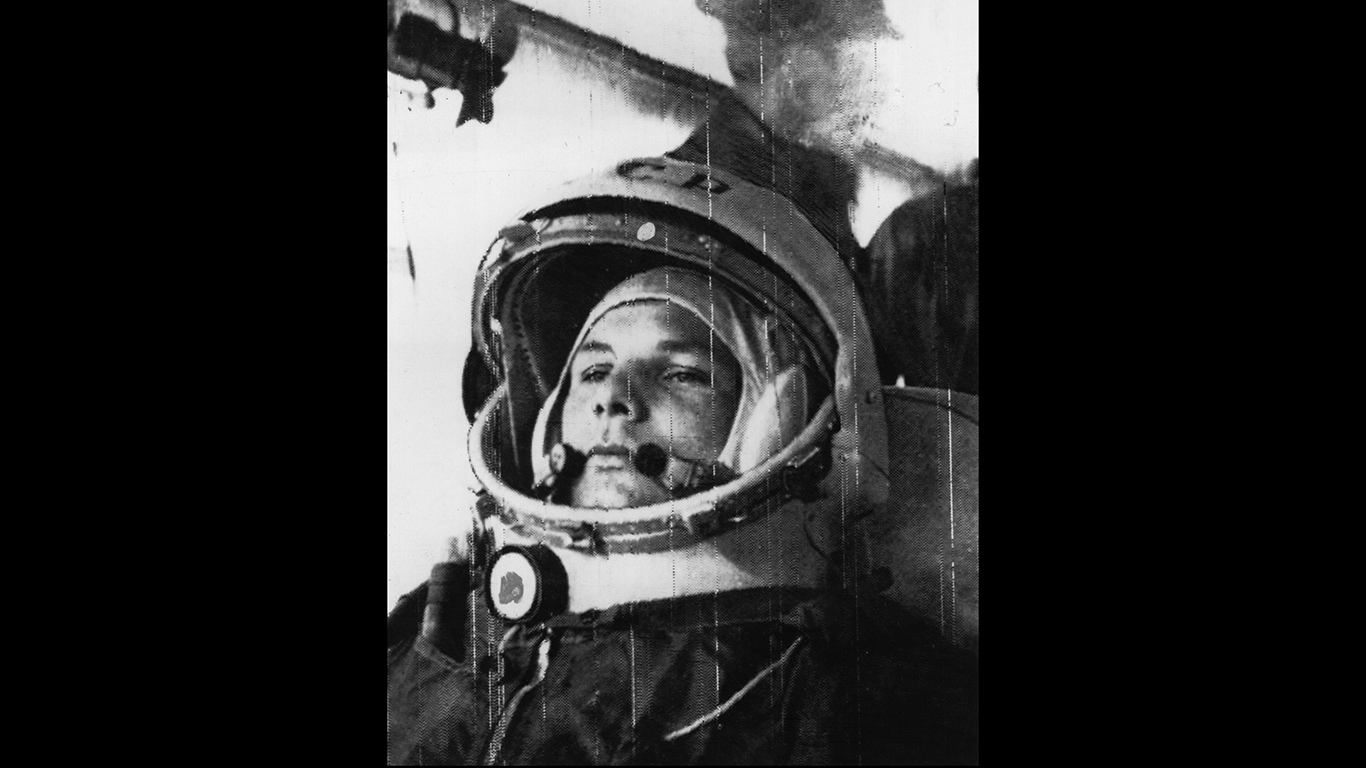 Cosmonaut Yuri Alekseyevich Gagarin became the first human to fly into space on April 12, 1961, once again giving the Soviet Union a win in the space race. Orbiting the Earth aboard the spacecraft Vostok 1, his flight took 108 minutes, reaching an altitude of 187 miles, in just over one orbit. The U.S had planned on launching its first manned space flight the following month, but wouldn’t achieve what Gagarin had, orbiting the Earth, until the following year. Gagarin became an international hero, and at home earned the title of Hero of the Soviet Union, with monuments and museum exhibits still honoring him to this day. The Soviet Union, wary of sending a national hero into space, allowed him to test flights for the air force, but he died on the job in 1968. His remains are interred at the Kremlin. 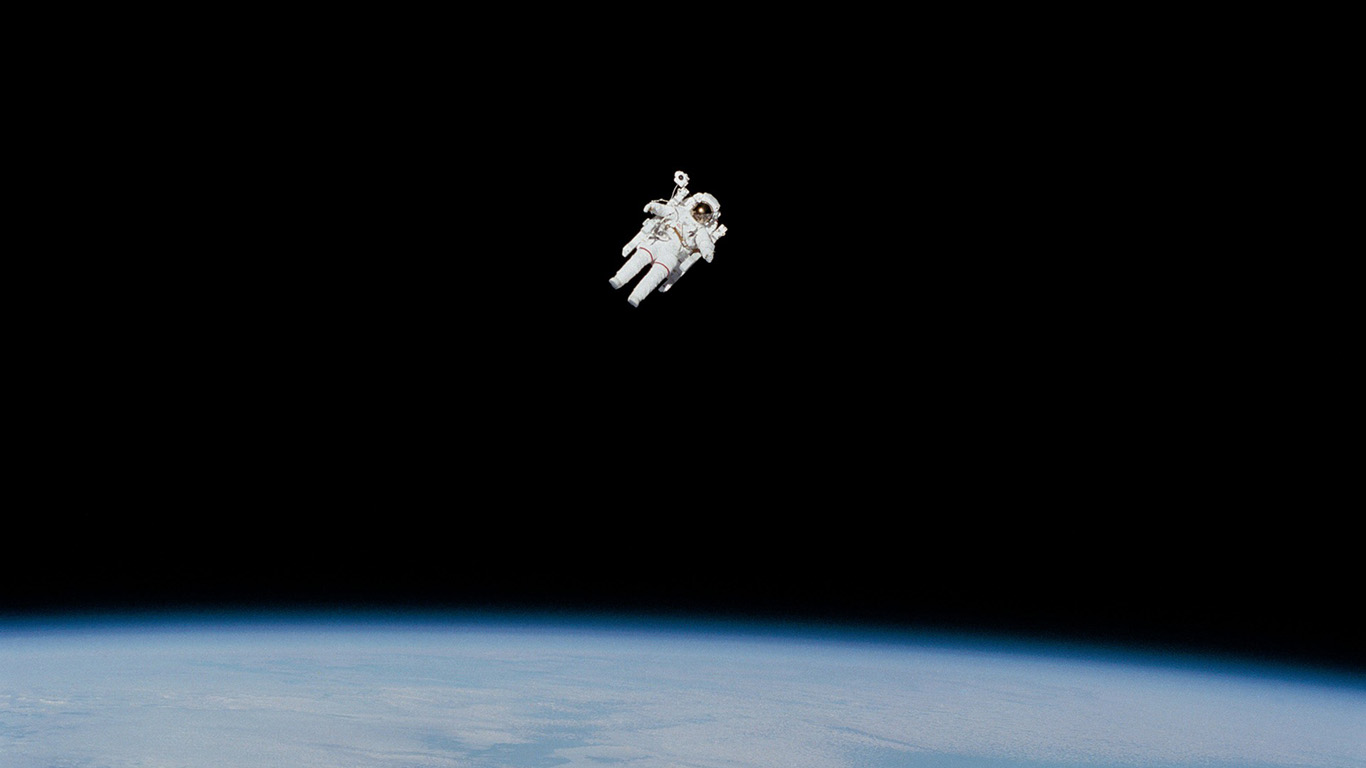 24/7 Tempo
The Most Unforgettable Moments in Space Exploration 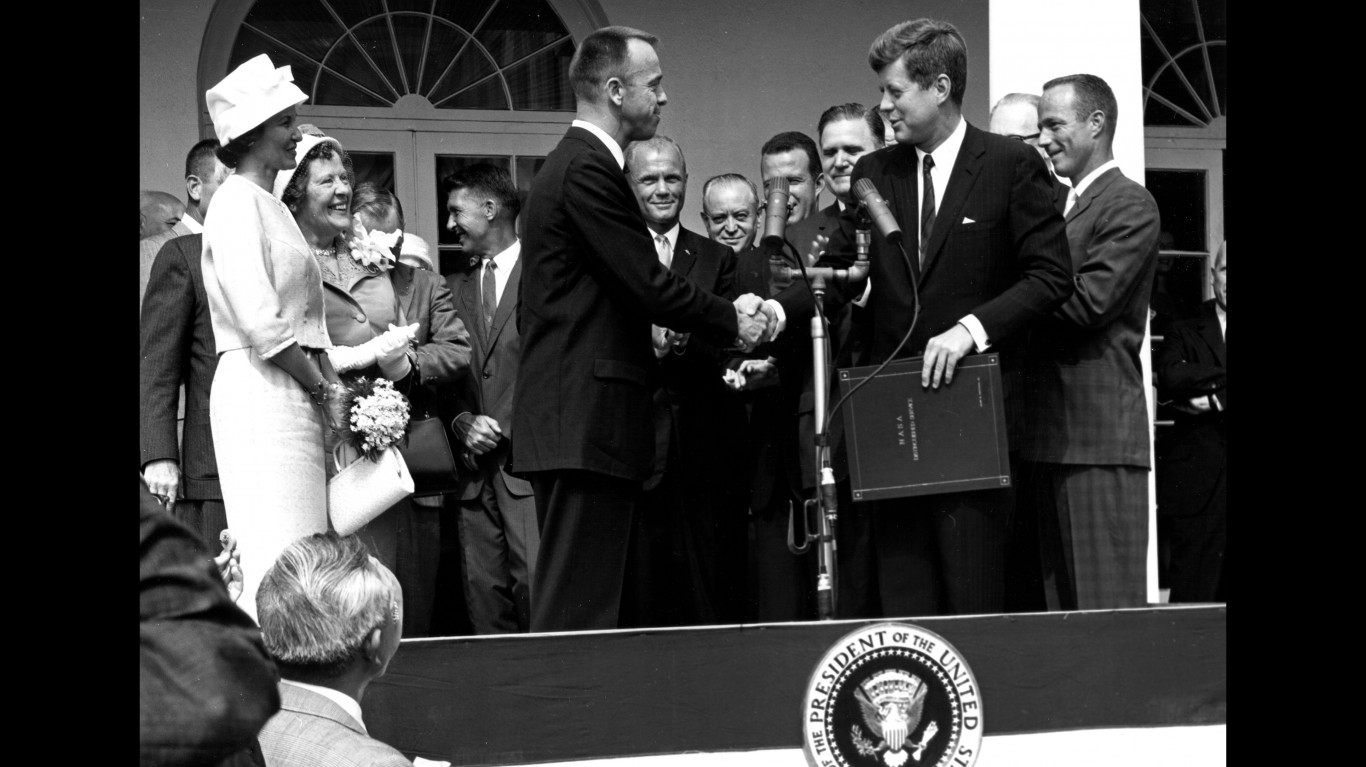 America’s quest to put a man into space started with NASA’s Mercury 7, a group of select test pilots chosen from 100 volunteers. They included Alan Shepard, Jr., who would be chosen as the first American to enter space inside the Freedom 7 capsule on May 5, 1961. Lasting just over 15 minute and reaching an altitude of 116 miles, the suborbital flight came less than a month after Russia put a man into orbit. But it signaled the launch of America’s space program. The accomplishment was watched by 45 million television viewers, and Shepard received a hero’s welcome. President Kennedy honored him with a Distinguished Service Medal, and just a few weeks later announced that America would put a man on the moon by the end of the decade. 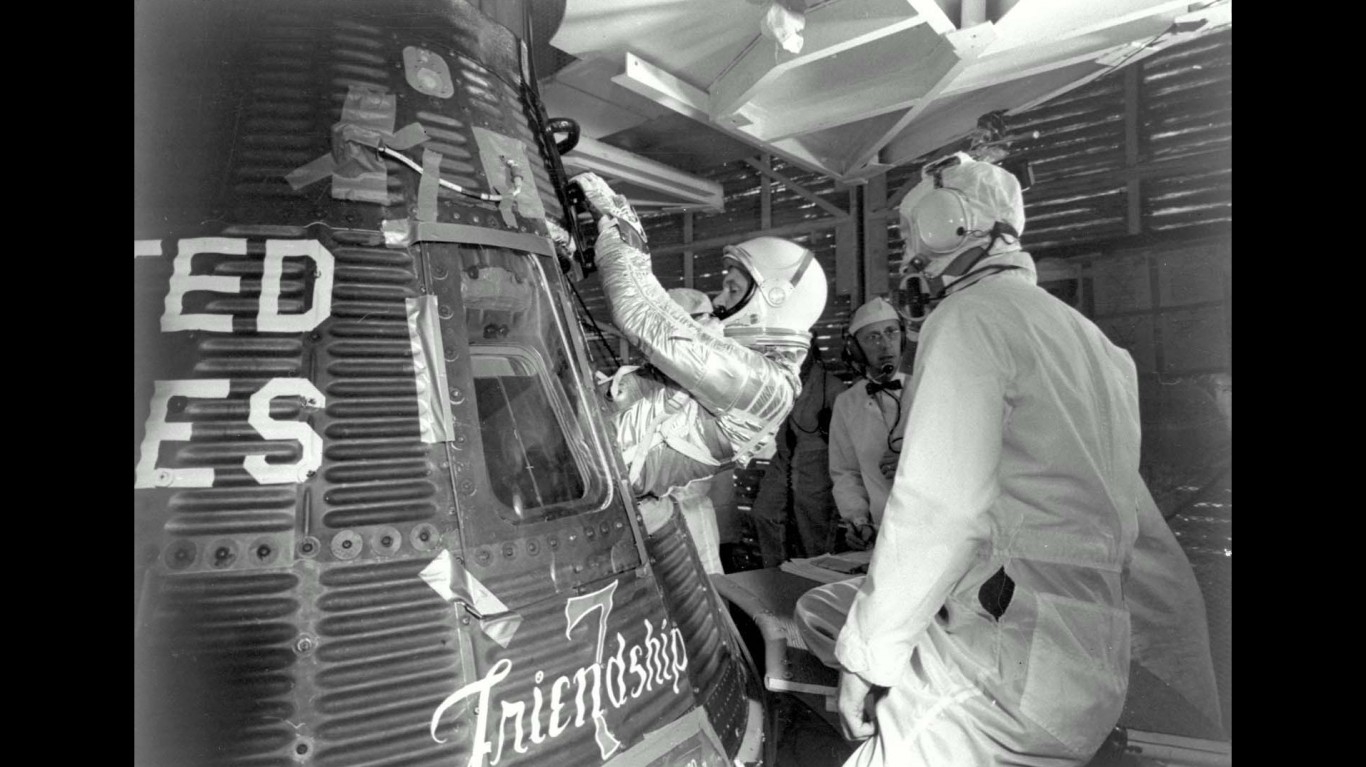 In the space race against the Soviets, the Americans had yet to beat or even keep up with their counterparts. They had managed to put a man into space just weeks after the Russians, but not into orbit like the Cosmonaut Yuri Gagarin. Part of the Mercury 7 elite group of first astronauts, John Glenn was selected as the third American in space and the first to orbit Earth, launching in the Mercury capsule Friendship 7 on February 20, 1962. The accomplishment launched America into orbital space flight, beating the Soviet Union to the moon in under a decade. It made Glenn famous; he was a U.S. senator from 1974 to 1999, and became the oldest man to fly into space at age 77. 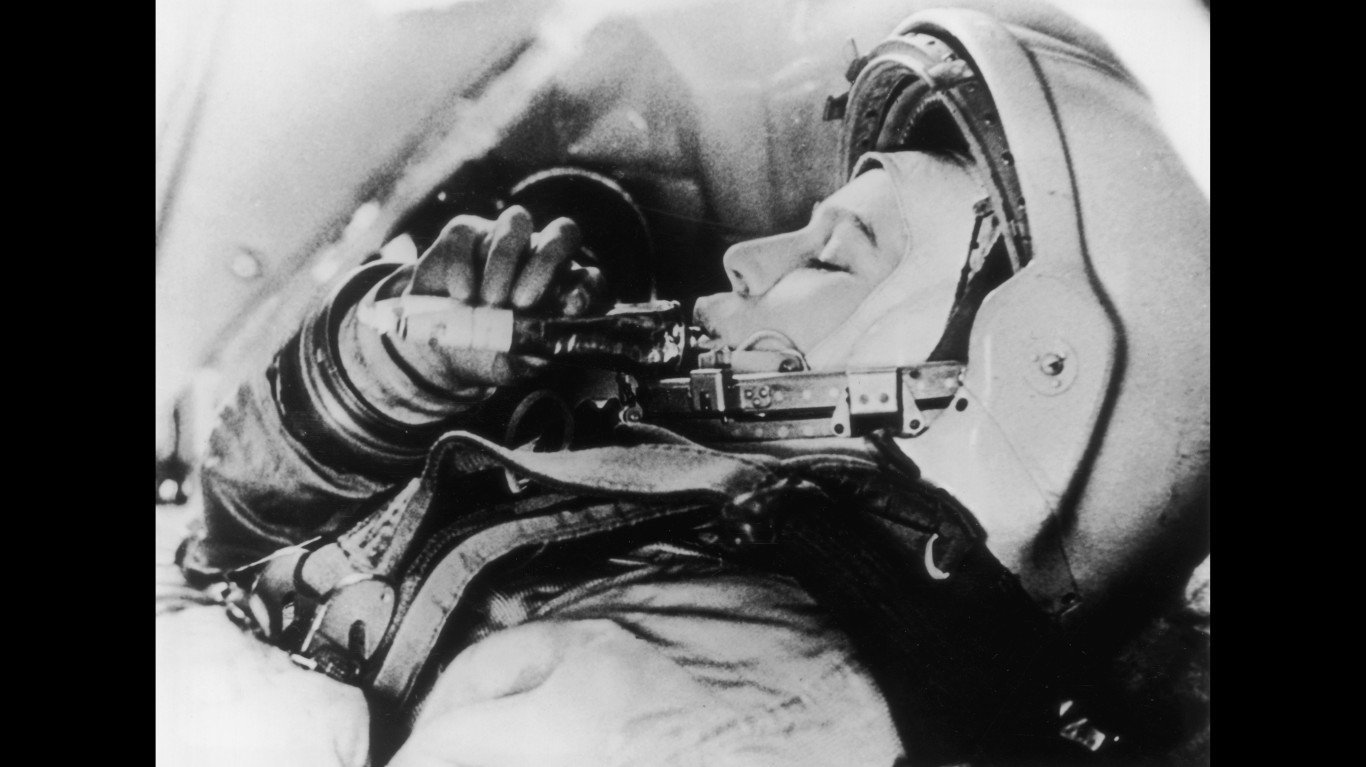 Americans may remember Sally Ride as paving the way for female astronauts, but two decades earlier, Soviet cosmonaut Valentina Tereshkova became the first woman to fly into space on June 16, 1963. She was one of four women who were trained for the journey at the time, but the only one to take flight. Vostok 6 was a dual mission with Vostok 5, piloted by cosmonaut Valeriy Bykovsky, and also made history by coming within just three miles of each other and exchanging communications. Tereshkova completed 48 orbits during her three-day mission, but her flight almost turned catastrophic when navigation caused the ship to move away from Earth. Tereshkov was honored as a Hero of the Soviet Union after her feat, and also received the Order of Lenin and the Gold Star Medal. It was decades before the Soviet Union sent another woman into space, in 1982, followed by the U.S. in 1983. Tereshkova, at age 26, remains the youngest female astronaut in history.