Drinking habits, like just about everything else, vary from place to place, and some cocktails and other types of beverages are more closely identified with certain states than others.

People have probably been known to order a Hurricane, that definitive New Orleans rum drink, in Montana, but nobody would ever associate it with Big Sky Country. The Mint Julep would be a refreshing enough tipple on the California coast, but for most people, it probably evokes Kentucky, and specifically the Kentucky Derby. (Wherever they are, the health-conscious might want to consider the alcoholic cocktails with the fewest calories.)

The legislatures in some 29 states have designated at least one official state beverage, drink, spirit, or soft drink (and occasionally several). Surprisingly, 20 of those states, presumably all major dairy producers, have chosen milk. One has gone with water. Others specify a particular brand of whiskey or a brand of soft drink. One has nominated locally grown tea.

Reviewing state websites, alcoholic beverage industry publications, and various pop culture sources, 24/7 Tempo has assembled a list of signature drinks from all 50 states. These are only occasionally the officially designated beverages — milk appears only once — but include cocktails invented in or indelibly linked to various states as well as individual kinds of alcohol or soda known to be consumed in large quantities in one state or another. (Food preferences vary widely, too. This is the most iconic food every state has given the rest of the U.S.)

Lift a glass to the colorful variety of American drinking habits. 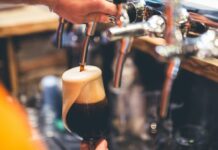