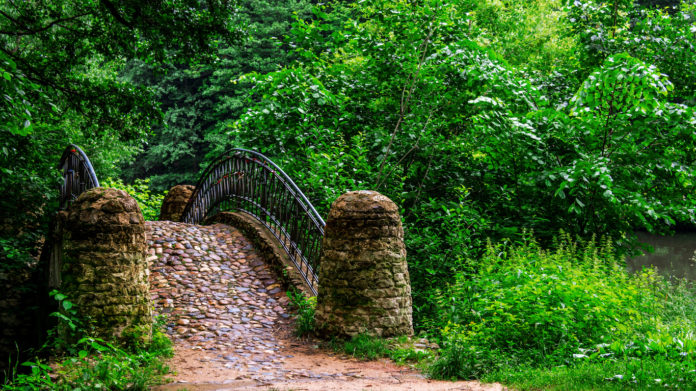 Parks and park-like public gardens improve the quality of urban life. What they offer varies from one to the next, but, depending on the particulars, they can be places to exercise or play; walk the dog or turn the kids loose; watch the wildlife or savor the flowers; have a picnic or a barbecue; swim or go boating or fishing; park the RV or pitch a tent. They’re also almost always place to just relax, sprawled on the grass or perched on a bench, reading, meditating, or simply thinking about things, with or without the headphones.

Boston Common, in the middle of the Massachusetts city of that name, is generally considered America’s first urban park; it was designated as an open space for public use in 1634. Some 15 more parks were created around the fledgling nation by 1800, including the National Mall in Washington, D.C., which dates from 1790.

Frederick Law Olmsted, the pioneering landscape architect who designed Manhattan’s Central Park (the first part of which opened to the public in 1859) with architect Calvert Vaux, designed 30 other city parks around the country in the latter 19th century. Olmsted believed that every city needed a park of substantial size to give the citizenry a place for “unbending of the faculties.” He later came to believe that parks should include facilities for recreation as well.

Today, it would be hard to find an American city or town of any size that doesn’t have at least a few public parks. A survey conducted by the nonprofit Trust for Public Land found that, as of 2016, parkland in the 100 largest American cities alone measured over two million acres — and that 69% of the population of those cities lived within a 10-minute walk of a park.

The median size of a city park is 3.8 acres, though the range is enormous. Chugach State Park, mostly within the vast city limits of Anchorage, Alaska, is the largest park in America, spanning 464,318 acres. On the other hand, Mill Ends Park in Portland, Oregon, designated an official city park in 1976, measures a mere 452 square inches. Located on a main downtown thoroughfare, Mill Ends is hardly a hidden park, but in searching the 25 most populous U.S. cities for examples, 24/7 Wall St. found one off-the-beaten-track oases occupying as little as 0.19 acres — as well as another spanning 1,402 acres.

What does it mean for a park to be “hidden?” Some of these are concealed from the street by walls or trees. Others are on private property, though open to the public at least some of the time. Some are in out-of-the-way neighborhoods. One is even secluded within one of the most famous parks in the world. None are among their cities’ main attractions, but all are worth discovering.

Using data from the U.S. Census, 24/7 Wall St. identified the 25 largest U.S. cities by population, then searched through the websites of city and state tourism bureaus, local newspapers, and city magazines to find parks and public gardens identified as “hidden” or “secret.” Consulting descriptions and reviews on these sites, as well as reviews on Yelp and TripAdvisor, we determined which of these lesser-known localities merited mention.