The Red Sox and Yankees are among the most ferocious rivals in sports and have a rich history of fisticuffs. One of the most infamous fights in the history of the rivalry was in 1973, when New York’s catcher Thurman Munson decked his Boston counterpart, Carlton Fisk, during a play at the plate. This led to a huge brawl with benches clearing and Munson and Fisk punching and kicking one another. In the 2003 ALCS, a relatively tame brawl became infamous after Yankees’ bench coach Don Zimmer, then 72, charged at Boston pitcher Pedro Martinez, who threw him to the ground. In 2004, another brawl occurred. This time Red Sox pitcher Bronson Arroyo drilled Alex Rodriguez with a fastball. The two yelled at each other as Boston catcher Jason Varitek intervened. The intervention was unhelpful, as Varitek and Rodriguez began fighting and benches cleared.

The massive melee between the Philadelphia Flyers and Ottawa Senators in 2004 holds the NHL record for the most penalty minutes in a single game. Philly came into the game with an axe to grind after Ottawa’s Martin Havlat nearly hit Mark Recchi in the head with his stick in their previous encounter. The game was fairly clean for the first two periods, with just 10 penalty minutes handed out. After a fight between Donald Brashear of the Flyers and Rob Ray of the Senators, a huge brawl broke out. Even the goalies fought each other. Officials tried to restart the game several times, but the players seemed to be interested only in fighting, repeatedly scrapping. When all was said and done, players had earned a whopping 417 penalty minutes — nearly seven hours worth. 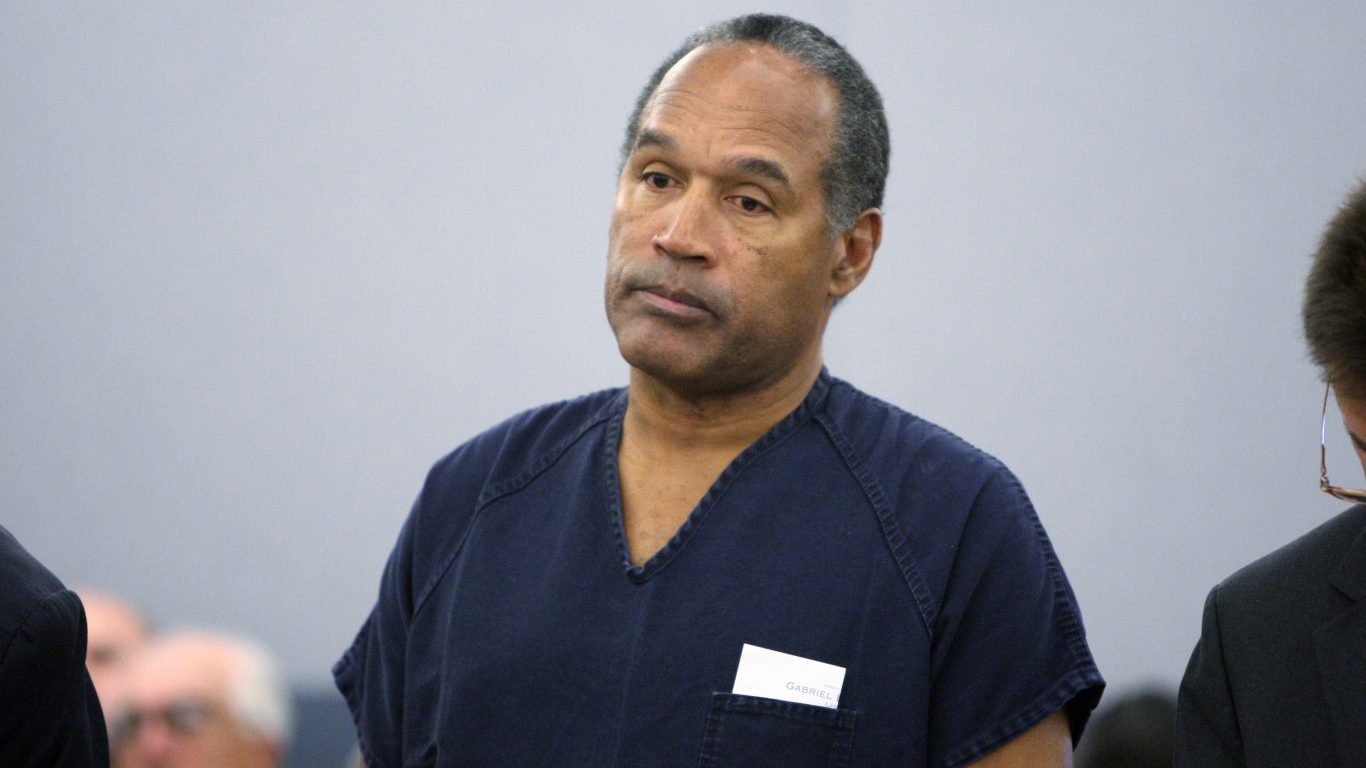 24/7 Tempo
Famous Athletes Who Ended Up In Prison

The Miami-FIU brawl was so large that 31 different players were suspended for participating in it. The melee began when several FIU players seemed to be upset by a Miami player showboating after a touchdown. After the extra point, several FIU players began fighting with their opponents, leading to an all-out brawl among the two teams. A Miami player swung his helmet at several Golden Panthers, while an injured FIU player swung his crutches in the scrum. Miami earned 13 suspensions, while FIU received 18.

Cleveland Browns defensive end Myles Garrett received the longest suspension in NFL history for a single on-field act after an ugly incident against rival Pittsburgh Steelers. With just a few seconds left in their game, Garrett ripped off the helmet of Steelers QB Mason Rudolph. When Rudolph charged at Garrett in retaliation, Garrett smashed Rudolph on top of the head with it. Pittsburgh’s offensive lineman David DeCastro quickly took Garrett to the ground, while center Maurkice Pouncey punched and kicked him. The teams were separated after some additional pushing and shoving. After the game, 33 different players were punished, their fines totaling nearly $750,000. Three players were suspended, including Garrett, who sat out the rest of the season.

Perhaps the most infamous brawl in sports history was in 2004, between the Detroit Pistons and Indiana Pacers — an incident forever known as Malice at the Palace. Indiana’s Ron Artest, now Metta World Peace, committed a hard foul on Detroit’s Ben Wallace in the final minute of the game. Wallace shoved Artest, and the teams scuffled but were soon separated. The real drama began after someone in the stands threw a drink at Artest, and he charged into the stands and attacked a fan. Artest was suspended the rest of the season, which amounted to 73 regular season games and 13 playoff games — the NBA’s longest-ever suspension for a non-drug related incident. Eight other players were suspended a total of 60 games for the fight and fallout. Artest, Jermaine O’Neal, and Stephen Jackson — who also entered the stands — were all charged with assault and received a year of probation and mandated community service.