Many symbols of the Confederacy — including statues, names, and flags — have been removed from public places nationwide. Still, many state flags to this day contain such divisive symbols, often considered racist. Most recently, Mississippi voted to replace its 126-year-old state flag, which featured the Confederate battle symbol. Instead, the new flag will include a white magnolia blossom.

24/7 Tempo reviewed the meaning of each state’s official flag using information from several encyclopedias, state government websites, and online state libraries. We included the date on which the current flag was officially adopted. Dates of subsequent modifications of the design or previous version of the flag were excluded.

The American flag is ubiquitous. People recognize it and know what every star and stripe represent. State flags don’t really enjoy the same fame.

A state’s flag is its emblem. Therefore, most flag designs include geographical features, historical dates, or symbols of industries that best represent the state.

Though state flags have their own combination of colors, shapes, and symbols, all U.S. state flags are rectangular with one exception, the pennant-shaped state flag of Ohio.

A big influence from the earliest time in American history is Native American culture, apparent in several flags — as well as state names. This is how each state got its name. 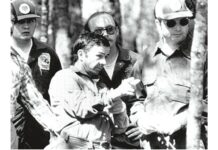