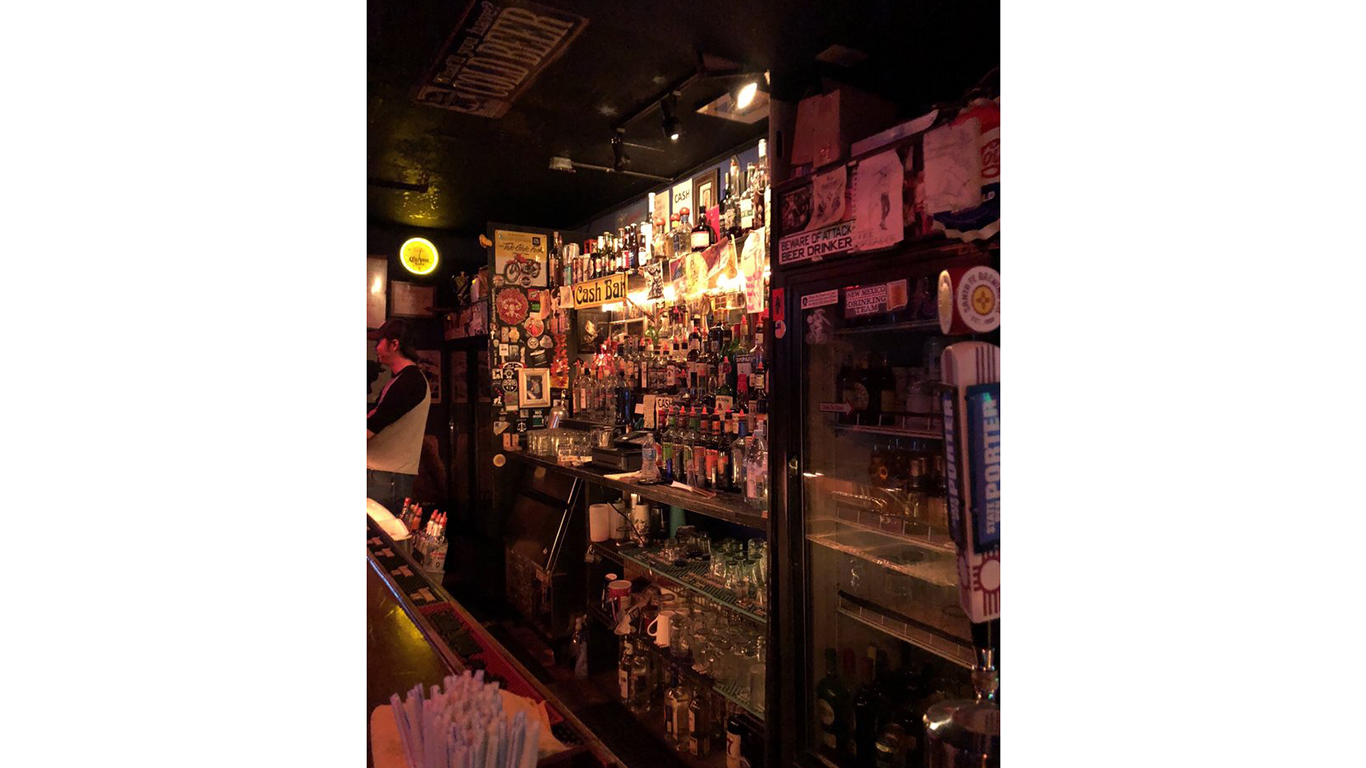 Source: Courtesy of Veronica B. via Yelp

According to Yelp: “Sort of gnarly dark post punk atmosphere but great music and GREAT bartending.” “[B]e prepared to get up close and personal with other patrons when it’s busy…[and] don’t order anything complicated!” “If you want a lil’ grit, a good pour from a happy bartender…, good metal/punk, and that general feel of being transported somewhere that time doesn’t exist, head here.” According to a new public health order issued in response to a spike in COVID-19 cases in the state, effective Oct. 16, all bars (as well as restaurants that serve alcohol) must close nightly no later than 10 p.m. 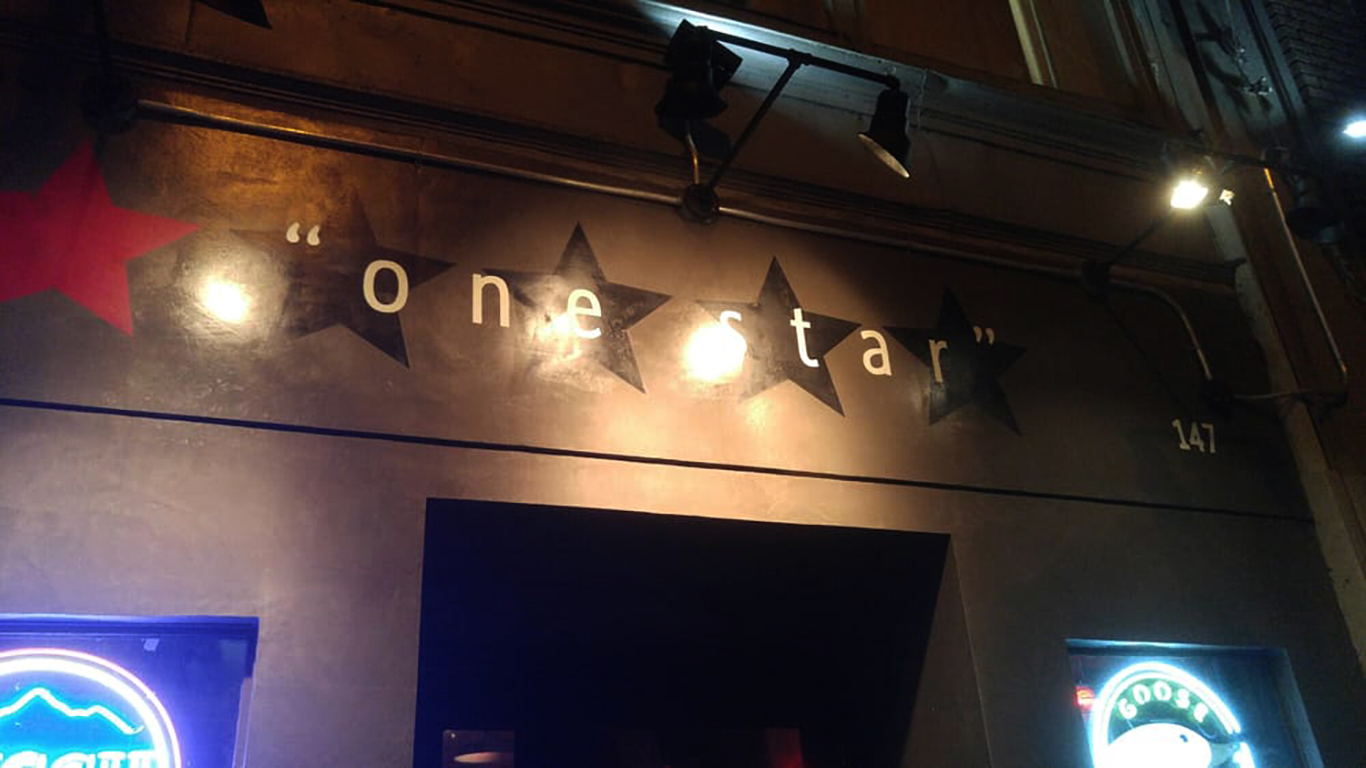 Joe DiPietro’s No Idea was a no-frills downtown dive bar on a trendy street in Manhattan’s Flatiron neighborhood. When the landlord priced him out of the place after 21 years, DiPietro moved to a new location nearby and opened this place — which owes its name to the one-star reviews of No Idea on Yelp, which he thought were funny. Of course, the One Star pages on Yelp are filled with four- and five-star assessments. Among the comments: “Kinda dingy lighting, long bar to sit at…” “Go for the tallboy and whiskey shot special for $8;” “Sure it’s simple, and plain, and that’s exactly what it’s meant to me.” The food offerings: Cheez-its for $1, Pop-Tarts for $3. One Star is currently open at 25% capacity. “You know the rules:,” says a recent post on its Facebook page. “Kindly drink 4x as much as you normally would.” 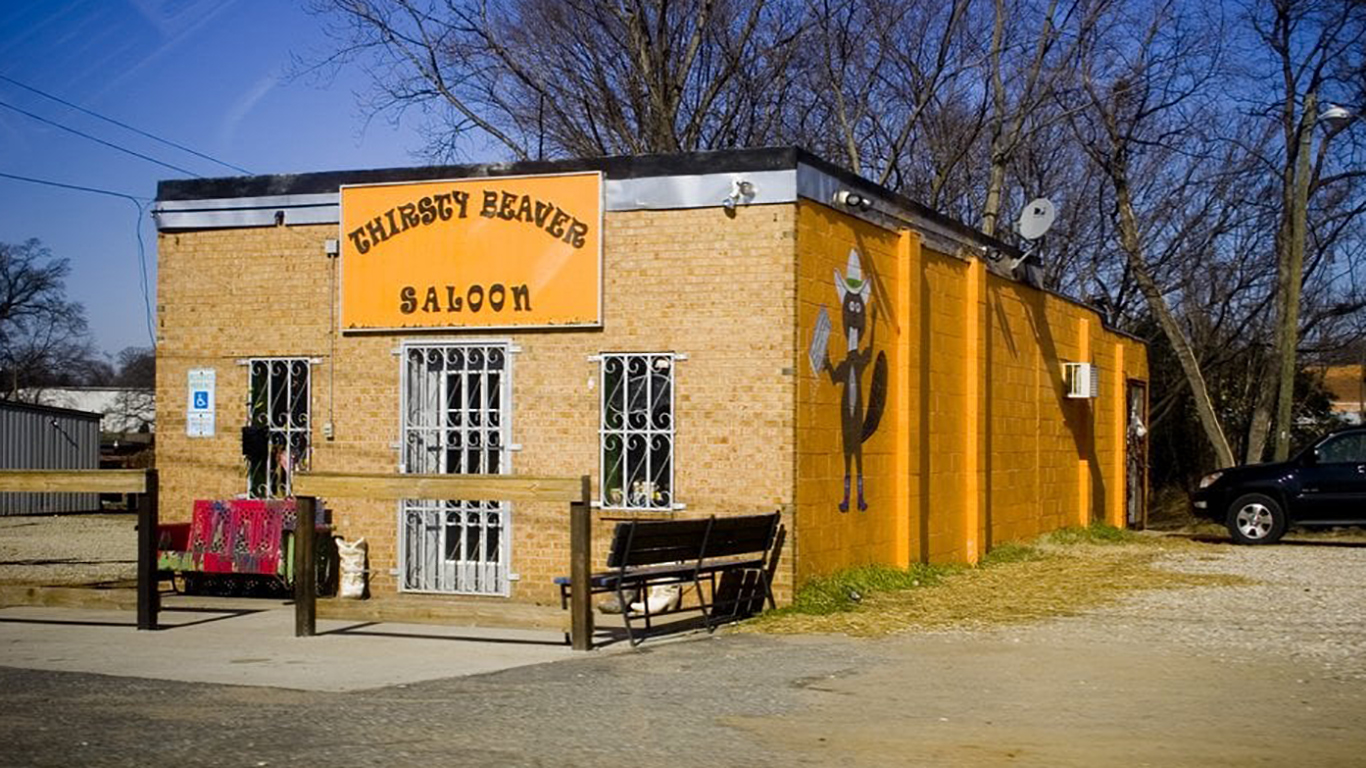 The owners of this modest brick-walled neighborhood dive refused to sell their property to developers a few years back, so the developers built a 323-unit apartment building around the place on three sides. Inside, wrote a Yelper, “It’s a small biker-esque bar with one bar, a couple of pool tables and cheap beer…and it has a 70s vibe” — expressed partly through a collection of bras hanging from the rafters and barred windows. “Grab yourself a PBR and pull up a stump to the old school jukebox,” advised another, “and slip into honky tonk heaven.” Thirsty Beaver is currently closed due to state restrictions. According to its Facebook page, “[W]ith the mandate of 30% capacity and outdoor seating only we feel it would be difficult at best to maintain the proper number and distance for the safety of our customers” — but it plans to reopen when restrictions are eased. 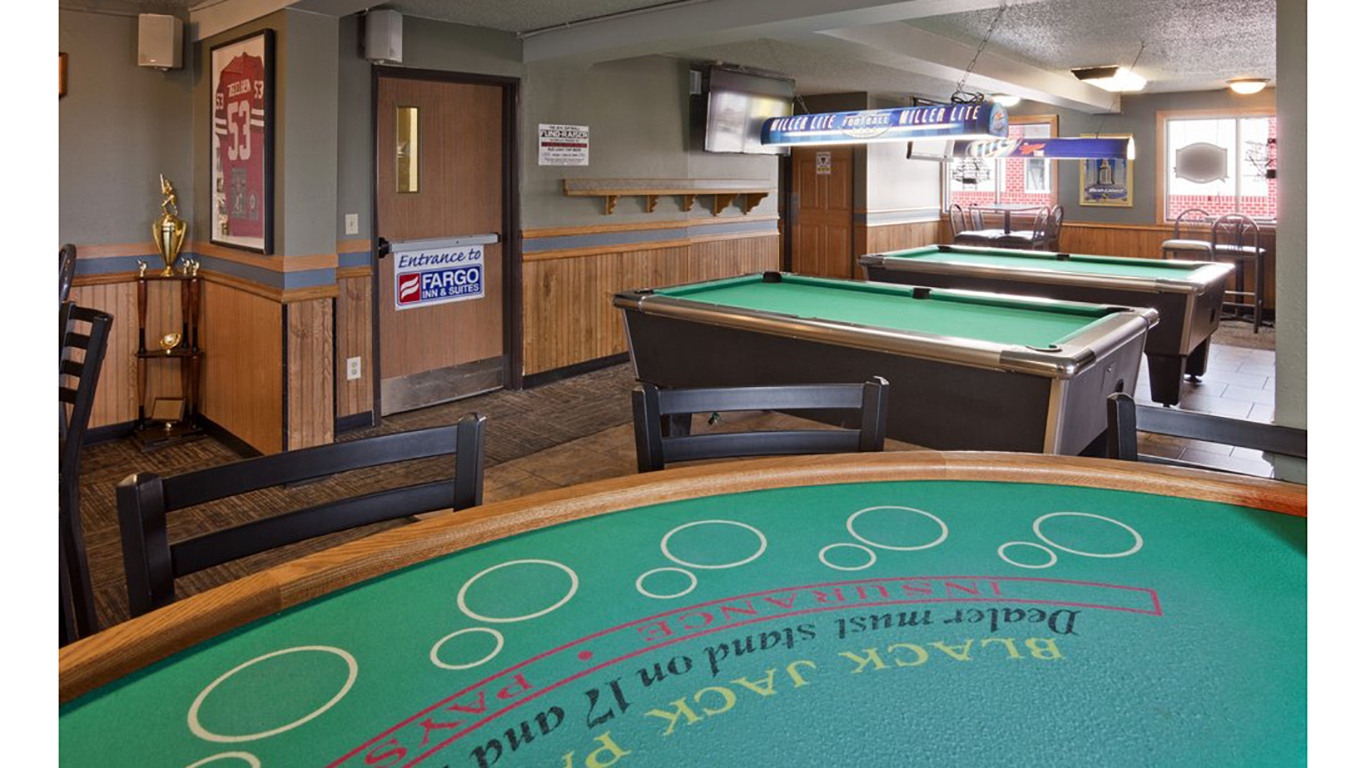 Source: Courtesy of The Box via Yelp

The Box is a combination bar and mini-casino off the lobby of an inexpensive chain hotel. It isn’t dark or dirty or dangerous-feeling, but qualifies as a dive with its menu (it includes cheese curds, fried pickles, pretzels with ranch dressing, and frozen pizzas); its low-priced drinks (including $6 domestic beer pitchers on Sundays, and $3.50 shots of various liquors on different nights — Jameson on Wednesdays, Fireball on Fridays, etc.); its “cool” and “friendly” bartenders (according to Yelp); and the fact that it’s the place to go when you don’t want to be (Yelp again) “creeped out by the low lives of downtown, but don’t want to drink in these boring places where people have name tags and company logos all over their clothing.” 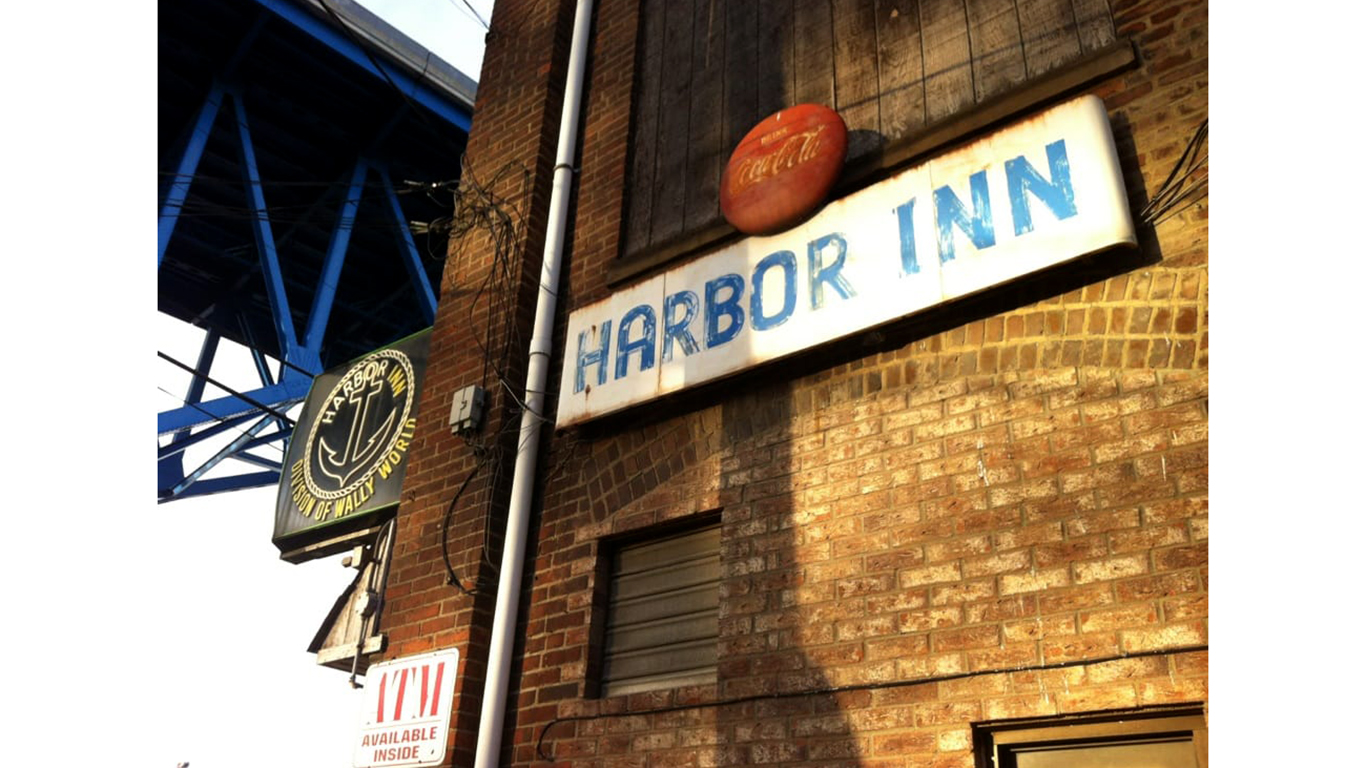 Source: Courtesy of Carl A. via Yelp

Reviewers on Yelp like this West Bank dive bar — one of the oldest bars in Cleveland — for its “nautical and rather outdated” decor; “friendly bartender [and] friendlier patrons,” and “the history, the vibe, the thorough beer list and the low price tag.” Advice from one Yelper from the ‘burbs: “Take 15 people here, drink a lot of beer and play darts. Don’t overthink it, you’ll hurt yourself.” 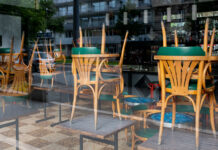 50 Most Popular Restaurants That Won’t Reopen After The Pandemic