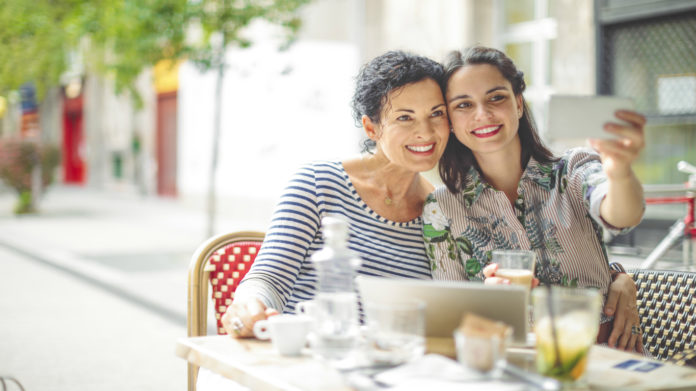 The term “brunch” first appeared in England in 1895, but neither the word nor the concept became widely popular in the U.S. until the 1930s. Mother’s Day, meanwhile, was first designated by President Woodrow Wilson in 1914.

When and why did the two institutions meet? As early as the ‘30s, brunch was being promoted as a time- and labor-saving opportunity for women, because it meant one less meal for them to prepare. By the 1940s, restaurants had begun to advertise brunch specials for Mother’s Day, the idea being that getting out of the house would give Moms a break. (The tradition of serving Mom breakfast doubtless sprang from the same impulse — but chances are you-know-who would still end up having to wash the dishes and clean the pancake batter off the counter.)

Today, Mother’s Day is the busiest day of the year for restaurants. Last year, the trade publication Restaurant Business reported that some 87 million adults will visit a restaurant for the occasion, with about a quarter of them taking Mom out for brunch as opposed to breakfast, lunch, or dinner.

While some restaurants compose special menus or stage elaborate buffets especially for Mother’s Day, most restaurants serve their standard brunch menus. These tend to combine hearty egg-based dishes (eggs Benedict, often with variations; omelettes; quiches and frittatas) and pancakes and waffles with savory lunchtime choices, including salads, sandwiches, and a common favorite, shrimp and grits.

Some brunch menus have foreign accents, like the Danish and Swedish dishes at Krokstrom Scandinavian Comfort Food in Kansas City or the Mexican specialties at Nada in Indianapolis. Restaurants in the South — for instance, South City Kitchen Midtown in Atlanta or the Long Island Café near Charleston — add iconic Southern foods people should try at least once, to more conventional dishes.

Some of the restaurants on this list are casual, with a lively café or clubby bar-and-grill vibe promising late morning fun. Others are more formal white-tablecloth restaurants where Mom will be pampered by attentive service. All are perfect choices for honoring Mom on her special day.

To identify the best brunch spots to take your mom in every state, 24/7 Tempo reviewed for each state the 10 top-rated restaurants in the breakfast & brunch category on Yelp. To be considered, brunch spots needed to be in or near a city with a population of at least 100,000 people. In states with few or no cities of this size, brunch spots in smaller cities were also considered. This data was obtained on April 18, 2019. Some of the restaurants more highly rated by Yelp users serve only casual breakfast, not brunch; others are closed Sundays or have closed, period. We also applied editorial discretion to filter out doughnut shops, coffee shops, diners, juice bars, sports bars, self- or counter-service restaurants, and other places that are too casual for a celebratory meal.