Words sometimes have two meanings, as Led Zeppelin sang in “Stairway to Heaven.” And indeed they often do. Especially, words can acquire new meanings and lose old ones. For example, “audition” once meant the power of hearing. Now it means trying out for a role, such as singer in band, actor in a movie, dancer, and so on. And a “natural” was once a person born with impaired intelligence. Now it more commonly means born with a special talent — the exact opposite — as in “The lead singer’s a natural.”

The English language is constantly evolving, and words sometimes acquire new meanings because of technological change. A carbon copy was originally a duplicate made using carbon paper. We don’t do that anymore, but we regularly CC people on emails. Truck once meant an exchange. Now, it’s a vehicle that carries heavy loads (although it has retained the earlier meaning in the expression “to have no truck with”).

Words also evolve differently in different places. Sometimes they diverge so much that a new meaning in one place may be unknown or incomprehensible in another. Here is a list of Canadian slang words and phrases Americans just don’t get.

24/7 Tempo used the Oxford University and Dictionary.com collaboration Lexico.com’s list of Archaic Words That Used To Be Common In English to compile a list of old words that have acquired new meanings. 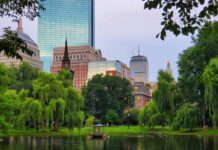