Pliny. Heady Topper. King Julius. If you’re a beer nerd, these names can automatically trigger some serious longing. In the past decade or so, a golden age of American beer has seen hundreds of simply spectacular (and often imaginatively named) new beers hit the market. Some are common, some are rare; some are imperial IPAs and some are imperial stouts. We’re glad they all exist.

It wasn’t too long ago that if you wanted a beer, your options were limited to the mass-produced classics like Bud or Coors and perhaps a handful of imports. But over the past couple decades, craft brewing has exploded the world over, with 716 craft breweries opening just in the U.S. in 2020 alone, according to the Brewers Association. (Speaking of mass-produced, these are America’s top-selling beer brands).

To compile a list of the best beers in America, 24/7 Tempo reviewed “Top 250 Rated Beers” on BeerAdvocate, as judged by its readers. (Information on beer type and alcohol by volume – ABV – also came from BeerAdvocate.) The site asks reviewers to score beers on a scale of 1.00 to 5.00 in 0.25-point increments on five ratable attributes: appearance, aroma, taste, mouthfeel, and overall impressions. The site then calculates ratings by weighting attributes differently (most important is taste, weighted at 40%). The weighting accounts for the fact that in the ranking here, the highest placed beers don’t necessarily have the highest reader scores. Scores are current as of mid-April 2022.

You’ll notice that while major brewing states like California are well-represented, Iowa’s Toppling Goliath Brewing Company makes several appearances, as well as do Tree House Brewing Company from Massachusetts and Alaska’s Anchorage Brewing Company. Florida is also well-represented. Clearly, there’s great beer coming from every corner of the country these days, and these are the best. (These, on the other hand, are America’s least favorite beers.) 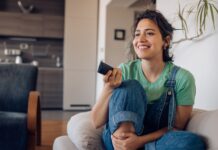