For decades, life expectancy at birth in the United States was edging upwards along with that of much of the rest of the world. Typical healthy U.S. newborns had a good chance of living into their late 70s – women usually longer than men.

However, a combination of social factors caused life expectancy at birth in America to drop by one-and-a-half years from 2019 to 2020, to 77 years and four months, according to the latest data from the U.S. Centers for Disease Control and Prevention. This was the largest year-over-year decline in lifespan since 1943, when young American soldiers were dying on the battlefields of World War II.

Life expectancy at birth is a scientific estimate of the average number of years a baby born in any given year is expected to live. It’s a key mortality statistic that captures both long-term health trends like the rate of obesity, and temporary factors like pandemics. Here’s how the fall in U.S. life expectancy compares to that of other wealthy nations.

This recent decline in lifespan from birth is largely but not completely attributable to COVID-19, which has killed more than a million Americans. A rise in drug overdoses tied to the spread of synthetic opioids, particularly among whites, was another factor. These so-called deaths of despair, which also include suicides and death by alcohol-related liver disease have been increasing over the past two decades.

Lack of access to quality health care has been a persistent drag on longevity in Black and Hispanic communities, and this problem was exacerbated during the pandemic as minority workers tended to have low-pay services jobs that increased their exposure to the virus.

To identify the states where people die the youngest, 24/7 Tempo reviewed the Center for Disease Control’s National Vital Statistics Reports for each state’s life expectancy at birth in 2020, published on Aug. 23, 2022. Change in life expectancy in years from 2019 also comes from the CDC. The percentage of the population without health insurance and the total population come from the U.S. Census Bureau’s American Community Survey 2020 5-year statistics.

The results show that West Virginia and Mississippi have life expectancies at birth below 73 years, while six states have longevity of at least 79 years, including Massachusetts, California, and Minnesota. Access to quality health insurance is a key factor; states with lower shares of people without health insurance tend to have lower life expectancies at birth. (This is how much your state spends on your health.) 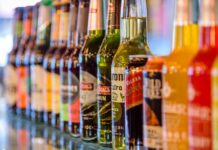 How Much Americans Have Been Drinking (Almost) Every Year Since 1850