About 60% of Americans with health insurance receive coverage through their employer. The COVID-19 pandemic changed that, as millions of people lost their jobs, and subsequently their insurance. Two years later, with the looming expiration of government initiatives to help people without insurance as part of the federal public health emergency response, coverage will once again be out of reach for many Americans. (These are the greatest public health achievements of the 21st century.)

To determine the states with the lowest rates of health insurance coverage, 24/7 Tempo reviewed the percentage of the noninstitutionalized civilian population under 65 without health insurance from the U.S. Census Bureau’s 2021 American Community Survey. We considered only those under 65 because that’s the age at which Americans become eligible for Medicare, and the uninsured rate for the population above this age is less than 1% nationwide. (On a more localized level, these are the counties where the most people don’t have health insurance.)

Data on poverty rates also came from the 2021 ACS. The rate of preventable hospitalizations – those for conditions that could have been treated at outpatient or ambulatory care facilities – came from the 2022 County Health Rankings report, an annual analysis produced by a joint program of the Robert Wood Johnson Foundation and the University of Wisconsin Population Health Institute. 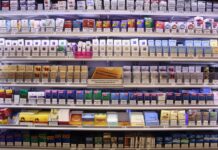 US Cities With the Most Smokers