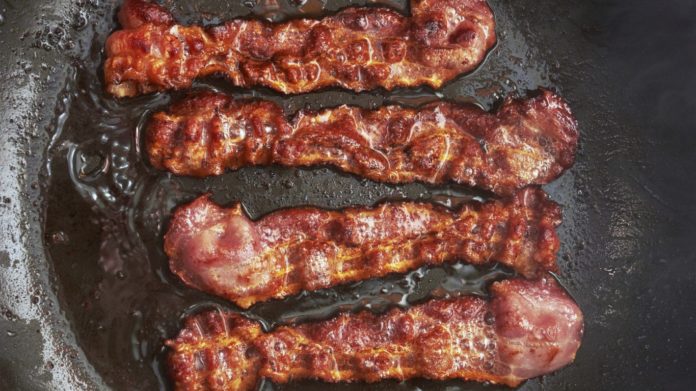 Bacon is a wonderful thing. It satisfies on many levels. It’s smoky, salty, meaty, slightly sweet, and crispy — unless it’s only lightly cooked, and then it’s just deliciously, unctuously fatty. It’s an indulgent pleasure, a food that always seems a little sinful — which, of course, only adds to its appeal.

We’re talking conventional American-style bacon here, the kind the Brits call “streaky bacon” to distinguish it from the leaner back bacon they favor (which is more like Canadian bacon, but with a bit more fat). Our kind of bacon is basically cured, smoked pork belly, sometimes with black pepper or herbs added to its exterior, traditionally cut into long, thin strips, and fried.

Bacon is also one of those foods that has an absolutely distinctive, unmistakable flavor — and of course, an irresistible aroma. This aroma, in which more than 150 compounds have been identified, can more or less be successfully mimicked by food scientists. As Advanced Biotech, a company that manufactures raw materials to the food industry, puts it, “Fortunately for flavor creation teams, bacon is a relatively easy flavor to replicate.” That fact, of course, has given rise to the phenomenon of bacon-flavored everything.

A surprising number of “bacon-flavored” foods aren’t made with real bacon, and many are even vegan — among them Ritz Bacon Crackers, Jim Beam Bacon Mustard, and Kettle Brand Maple Bacon Potato Chips.

At 24/7 Wall St., we love the way bacon tastes and smells as much as anyone — maybe more — and we appreciate the creativity of the food-centered scientific community and the product development teams who work for big food companies. And we enjoy a hint of bacon in some non-bacon products, including snack foods like the aforementioned crackers and chips. But some bacon-flavored products just plain have no reason to live. They take bacon where it doesn’t belong.