Obesity, which is linked to increased risk of many serious health conditions and diseases, has been a public health concern for years. More than 42% of middle-aged adults between 40 and 59 years are obese, the age group with the highest prevalence of obesity. And if the risk of certain conditions increases with age, being overweight and obese further increases these risks.

Losing weight before the age of 30 is, for some, as easy as cutting just a few donuts a week. With age, however, body functions the processing of food and drinks get more complicated. Metabolism slows down, and hormonal imbalances become an issue, changing the way the body breaks down fat. These are the 17 biggest myths about metabolism that just won’t go away.

Even though it is not as easy to get in shape in your 40s as it was when you were a teenager, it is not impossible, and it is a worthwhile goal. “You start to feel better — stronger and happier — in two weeks, and see changes typically in six weeks,” Andrea Metcalf, a celebrity fitness instructor, said.

The general rule is that you need to consume fewer calories than the body burns a day. Anything beyond that varies from one person to another, as current weight, physical activity, medical issues, and certain medications play a role. Here is what nutritionists want people to know about calories.

To determine at least 18 ways in which a person over 40 years of age can maintain a healthy weight, 24/7 Tempo spoke to people with years of experience in the fitness industry and examined multiple academic studies and medical reviews. 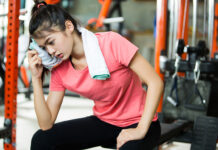