The Statler Brothers (who weren’t real brothers) had one big pop hit, the mid-1960’s “Flowers on the Wall,” but enjoyed decades of popularity on the country charts, and recorded religious and inspirational songs as well. Illnesses and deaths over the years resulted in changes of personnel in the group, and the Statler Brothers retired in 2002. 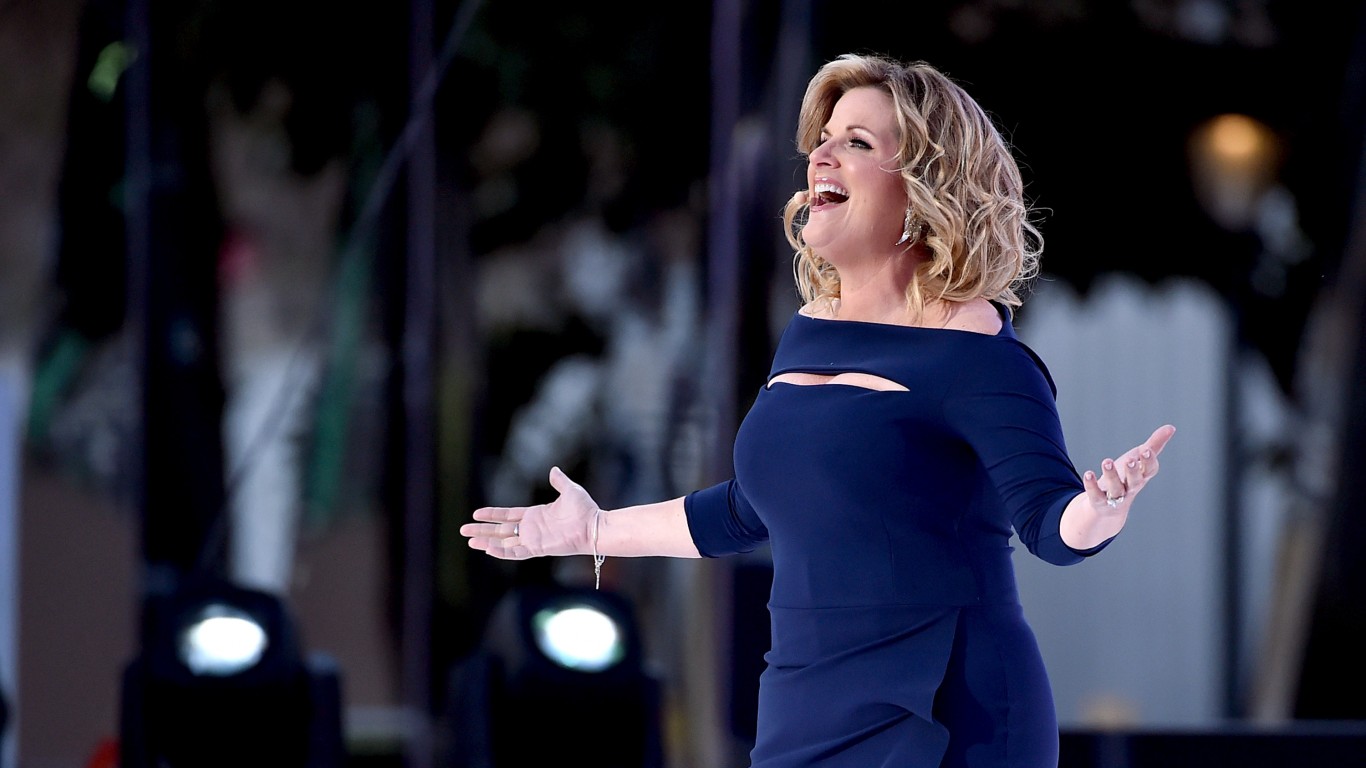 Georgia-born Trisha Yearwood’s debut single, “She’s in Love with the Boy” reached No. 1 on the Billboard country chart in 1991, kickstarting a career that went on to include numerous hit singles and albums. Yearwood also had stints as a television actress (most notably on the military drama “JAG”), wrote three cookbooks, and had a Food Network cooking show. Married to fellow country music star Garth Brooks (see No. 1), she has won three Country Music Association awards and three Grammys, among other honors.

Initially attracting attention as the musical partner of alt-country pioneer Gram Parsons, Emmylou Harris has gone on to release an astonishing number of albums, including a collaboration with Dolly Parton (No. 18) and Linda Ronstadt; duets with such legends as Willie Nelson (see No. 5) and George Jones; and eclectic collections of brilliant originals and classic country, folk, and rock tunes.

Known as “the First Lady of Country Music,” Tammy Wynette is remembered for such poignant classics as “D-I-V-O-R-C-E” and “Stand by Your Man” — just two of her 17 No. 1 country hits in the late ’60s and early ’70s. She was married for several years to the legendary George Jones and recorded a series of duets with him even after they divorced. 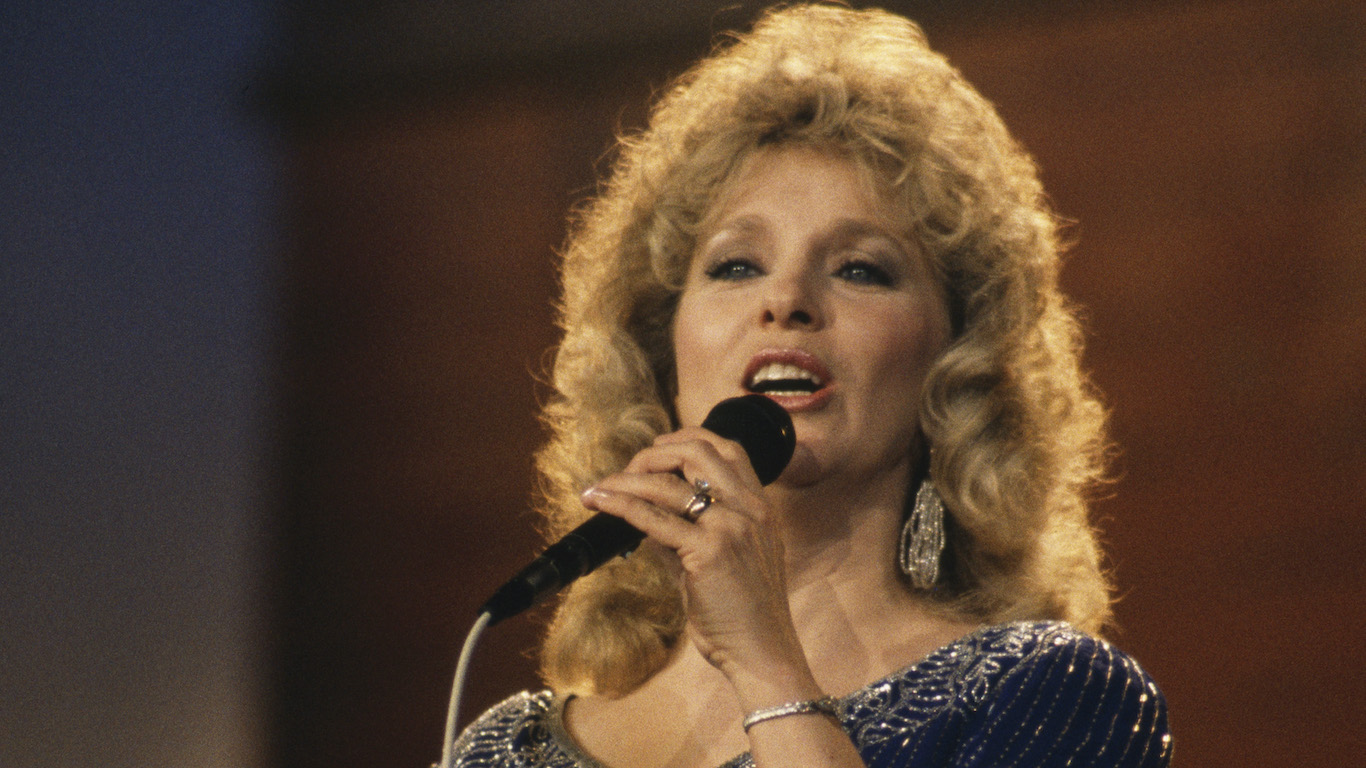 Country star Bill Anderson (see No. 56) wrote Connie Smith’s first single, “Once a Day,” especially for her, and it ended up spending eight weeks at the top of the country charts. Other top 10 hits followed, but in the early 1970s, she turned increasingly to gospel music. She returned to the secular world with a 2008 album produced by her husband, multiple Grammy-winning rockabilly and traditional-country star Marty Stuart.

Zac Brown, the 11th of 12 children, formed a band in Georgia in 2002 and started his own recording label a year later. The band has had eight No. 1 hits on the Hot Country Songs chart. Their first, “Chicken Fried” in 2008, was their biggest. Five albums reached the pinnacle of the Top Country Albums chart, including “You Get What You Give” in 2010, one of three Brown albums to top the Billboard 200. The North Carolina singer-guitarist blends rock and outlaw country in a rowdy style. He has had two singles go to No. 1 on Billboard’s Hot Country Songs list — “Drink In My Hand” and “Springsteen.” Church has had 16 top-10 country hits. Three albums — “Chief,” “The Outsiders,” and “Desperate Man” — all reached No. 1 on the country album list. “Chief” debuted at No. 1 on both the Billboard 200 and the Top Country Albums charts in July 2011.

English-born Australian singer and songwriter Olivia Newton-John is fondly remembered for her star turn in “Grease.” Newton-John has won four Grammys (one for Best Female Country Vocalist in 1973), posted seven top 10 country singles such as “I Honestly Love You (Let Me Know)” and “Have You Ever Been Mellow.” She and also had two top-selling Billboard 200 albums. Recently, she has made public her battle with cancer.

In a 14-month span ending in November of 2018, the 26-year-old, Georgia-born singer had six No. 1 hits in the Hot 100 and 18 songs reached the top 10. His meteoric rise has translated into success in album sales, with three reaching the top 10 on the Billboard 200, including the No. 1 “Experiment.”

Country music hall of famers The Oak Ridge Boys hail from the Northeast and the South. They started producing hits in 1977, and thus far, the one-time gospel singers have had 17 Hot Country Songs No. 1 hits and 34 top 10 hits. Among those is the smash “Elvira,” which stayed atop the Hot 100 for five weeks in 1981. Four of their albums went to No. 1 on the country chart.